why don't they shoot more poets?

I have normal aspirations mostly. Maybe.
Normal: not wanting to be rich just successful in my own view, as a poet/writer mostly poet though.
maybe not so normal: the extreme of that success is being assassinated for being a poet, for aligning words in such a way that we are found to be dangerous. My example would be Lorca. I admire his poetry and plays, spent a summer translating a few of the poems. I envy his death tho it is not envious.
Normal: to write about what I experience and see others experiencing.
hummmm: to have large portions of my memory erased so  I can be in a pure place with my madness and write from there. It's the view of the world a poet has that drives him/her to write, the more that view is abstracted from the society the better the work to a point and I don't know where that point is and given enough time all artists cross it.
these are my examples for today, all questions will be fielded after the poem.

on 04/30/1945 the world was rid of a monster, exactly six years earlier another monster made it's debut and has ingratiated itself into the normal consciousness.
the former being the suicide of Adolf Hitler and the latter being CBS television made it's first broadcast at the worlds fair. I don't mean to pick on CBS alone as they are all a conglomeration of pushers with their junk easily spread into the veins of children and adults. I almost never watch television programs or television itself anymore. I had my fill over a three year period where I could not do much more than lay on a couch and observe the box. I mean to pick on Hitler though and acknowledge that his mosterousness is incomparable to any contemporary person.

This is how I view ECT: 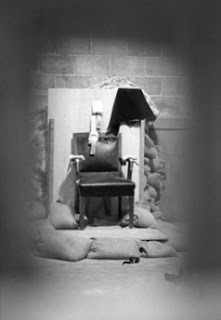 electricity is always running through us - we just
don't care for increasing the amperage.


Electric chairs can be wired badly and still
kill with efficiency.


I had intended for this to be a different poem. Something from my back stock about poets be assassinated for their good looks but it is now going to be the above write.

yesterday I cleaned my .38 and 30 aught 6, today I get the scope mounted and dialed in.
I load my thirty-aught-six to board the downtown train...

Email ThisBlogThis!Share to TwitterShare to FacebookShare to Pinterest
what I felt it was all about: aspirations, assassination, psychosis