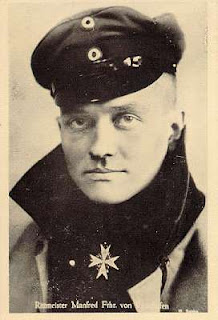 As a child I would often look up to the outlaw or the seeming enemy. It was for his bravery, daring, disgust with the law creator. Today in 1918 one of my earliest and most beloved heroes was killed by the allied forces, the name of the pilot who shot him down escapes me now but my hero is/was Manfred Von Richthofen, the bloody Red Baron. I don't think it's that odd or anything, there are many boys who would want to be looked up to like that but one of the things I often would admire was that he was killed. Later in life I would liken him to Billy the Kid (who fought not for country) and Federico Garcia Lorca (killed for being a poet). As noted before many of my heroes kill themselves while some die of old age. What I didn't mention was that there are a lot who are murdered for being who they were.When greatness is recognized there is no recognition of Country. Even the British buried him with Military Honors as he was deserving. I also admit that I would not like to see the reign of hell he would have brought if he lived, but death doesn't allow the extraordinary to be such for too long, death or worse shuts the door suddenly.
going into war and perishing in it is not that different from suicide really, it is only easier to connect to the reason the person has died. The Red Baron flew in the face of his enemy and taunted them, baited death until it arrived. This is not the action of a stable brain.

Email ThisBlogThis!Share to TwitterShare to FacebookShare to Pinterest
what I felt it was all about: corelli, heros