Reality is a pain in the ass sometimes.

A few things for today - maybe no poem but we shall see.
I was reading a friend of mines blog where she shared an excellent story of strength through defiance and 24 year old bravado - you can read it yourself here. One of the commenters mentioned getting a CCL permit, which I read to be a CCW permit - a license to carry a concealed weapon. There are a lot of folks against this for various reasons but the aforementioned story highlights a point I often make in the face of the "wouldn't it be a better world without guns?" - my answer? - no.  what? you didn't hear that? - It was a resounding NO.
Say the story ended a little differently and the 24 year old was beaten or worse by the two offenders instead of backing off. What was she or the guy she was with going to do about it if it escalated into an absolute horror show? Not a damn thing could have been done except possibly call the police who would have arrived well after what ever could have happened happened.
I firmly believe that all women should carry a weapon that they have been trained to use in the moment of need. I would feel much better if my mentally stable wife would walk around with her SR9c in her purse (and maybe she does, who knows?). 49 states have acknowledged that this right exists for a reason - self preservation, among others.
I usually give this scenario - imagine a large man who stands nearly 6'2" - weighing well over 200 pounds and no-one (including doctors) would describe him as fat. A large animal and can be terrifying to behold. If he met a woman or girl and decided that he was to be a brute - is there anything that can be done to stop him? not by most unarmed females, however, a smallish revolver or auto is an equalizer - one that would stop even the most vicious attack. It is far better to be judged by twelve than carried by six.
I'll end this here but I am sure it may be carried on in the comments.
If you can - get a CCW, train properly and have it should the need ever arise and I hope that it never will. It isn't that you ought to live in fear, it is that you ought to want to make it to bed every night and wake up every morning unharmed.

for some levity...
look what I found! 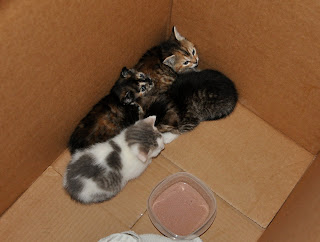 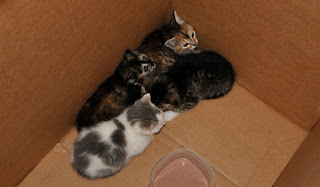 Four of the most precious kittens - between my and my neighbors back yard. Jackson has already named one. 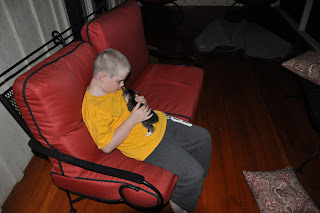 mittens.
From the mind of Jhon Baker at 5:00 AM

Email ThisBlogThis!Share to TwitterShare to FacebookShare to Pinterest
what I felt it was all about: CCW, Guns, kittens